There is a weekly sparring class in addition to the regular friday and monday night classes. This class is open to students who have been attending the Monday and or Friday classes regularly.

This is an entirely optional, additional class for those that want to test and hone their Bagua skills under a certain level of resistance and hard physical contact.

We use the "San Da" format as a platform to both pressure test what is learned in the Monday and Friday classes and as a stepping stone to developing basic functional martial arts ability.

In addition to this, some students have expressed a wish to compete at some point in the future and the "san da" approach - enter/kick/punch/standing grapple/throw - seems to offer the ideal competitive format for the material studied in the Yyizong Bagua/Xingyi syllabus.

The protective gear - particularly the boxing gloves – obviously limits the use of certain techniques and requires that others are adapted somewhat. This reduces the toolbox of Bagua and Xingyi techniques down to a small core of high percentage strikes/throws that work well under these conditions, however these are all still traditional techniques taken directly from the Yizong syllabus.

The students in the following clips have only been sparring like this for under 18 months - and some for as little as six months:

This type of san da training with protective equipment and a strong level of physical contact was always a feature of the training at Hung I Hsiang‘s Tang Shou Tao school in Taiwan and resulted in many competition victories for Luo Loashi and his classmates in the full contact fighting competitions on Taiwan in the 1970‘s. 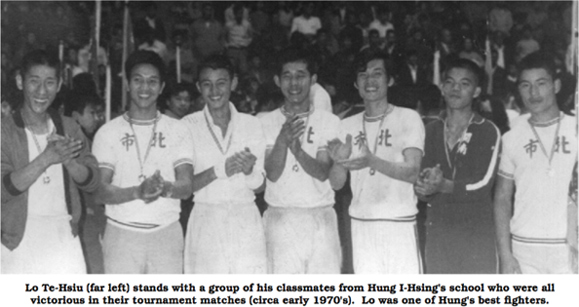 In order to learn how to respond spontaneously to an opponent‘s movement the student needs to develop the ability to change and vary the set forms. Hong states that the student must have a flexible mind and think about possible variations when practicing. He says, 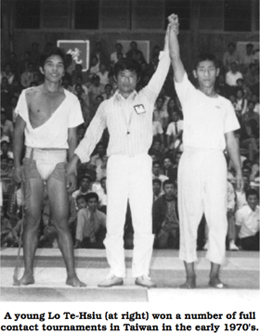 “if you cannot figure out the variations, the forms are of limited use.”

He continues by saying that the instructor cannot really teach the student how to change. The student has to use his mind in practice and figure it out for himself. He said he was not taught this ability by Zhang, he learned how to do it through experience in sparring and practicing two-man and three- man sets of the 64 linear bagua Zhang techniques. He learned by getting hit in sparring practice and then trying to figure out why he got hit. He said that in the past he would practice sparring so much that he would come home with bruises all over his face.

“You cannot just talk about sparring, you have to practice it.”

*THIS CLASS IS ENTIRELY OPTIONAL AND ONLY FOR THOSE STUDENTS WHO WANT TO TEST THEIR ABILITIES UNDER COMBAT CONDITIONS OR WHO ASPIRE TO ENTER A SAN DA COMPETITION. EQUIPMENT IS PROVIDED INTIALLY BUT STUDENTS ARE EXPECTED TO PROVIDE THEIR OWN HEADGEAR AND GLOVES/SHINPADS ETC IF THEY ATTEND REGULARLY. YOU ARE ONLY ELIGIBLE TO ATTEND THIS CLASS IF YOU HAVE BEEN A REGULAR AT THE MONDAY & FRIDAY CLASS FOR THREE MONTHS*